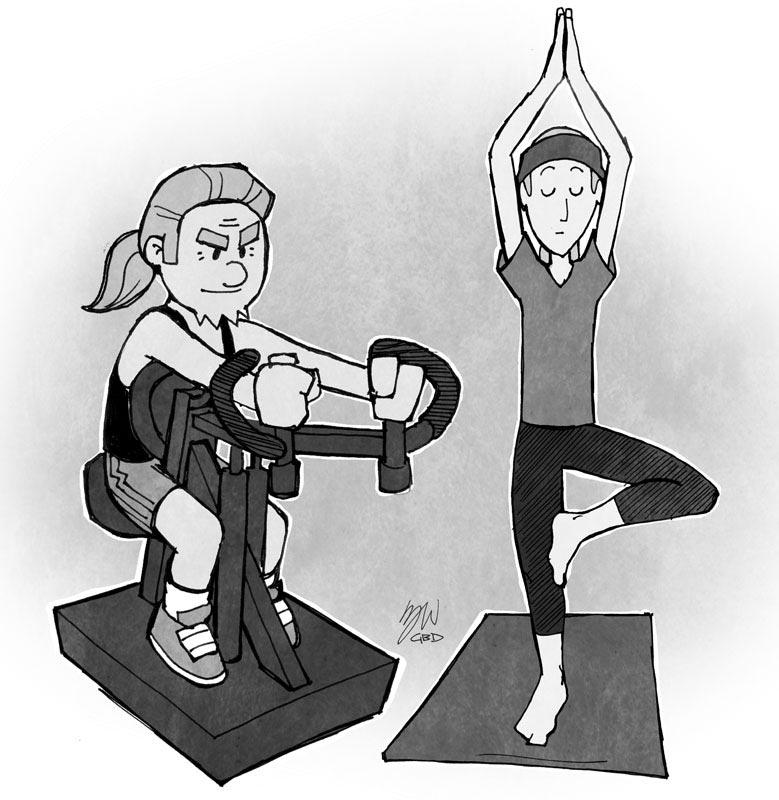 Can a wellbeing program not only be good for the residents but also a revenue stream for the village?

Heather’s story
Initially I became a vegan for health reasons. Then it became a moral issue. Now I do it just to annoy people. That is, according to my fiancé. Robert would easily become a vegetarian if bacon grew on trees. So as you can imagine we are still fighting over the wedding menu. He wants a BBQ. I’m fine with that as long as there is no meat, seafood, poultry or dairy. That’s when he threw down his motorcycle helmet and yelled: “we didn’t fight our way up the food chain to eat lentil burgers!” But I’ve seen Robert with a pair of BBQ tongs. He doesn’t have a BBQ – it’s a cremation! “How do you like your steak” he asks his mates. Yeah right. As if you have a choice. When his steaks are cooked he calls for a plate. Surely an urn would be more apt. He argues that he wouldn’t be cooking on the big day but honestly, a BBQ?

We are also fighting over the guest list. I want to invite family and 20 of our closest friends. Robert wants to invite no family but the entire Ulysses Motorcycle Club as this is his “real family”, he argues. And he wants us to ride in to the ceremony on a belching Harley Davidson. I want us to arrive in a white Toyota Prius. Modest and ecofriendly. Moreover, I’d planned for us to perform a traditional South American Inca ritual involving the swapping of clothes. (It’s very moving if you ever see it.) Robert wants the clichéd church-style vows but – wait for it – amended to include Led Zeppelin’s lyrics for Good Times Bad Times. (I wish that band could be muted in more ways than one!) Naturally, I refused. So Robert has since retreated to the garage with his beer and tool kit. (I can’t recall my first wedding ever being this hard.)

Eventually, our celebrant stepped in. She refocused us, asking what we learned from our first marriages and what we wanted to celebrate most in our second marriage ceremony. “Our friendship with our friends,” we agreed. With this in mind, we reimagined an important part of the ceremony incorporating our friends and family building a wood fire for the shared main meal with Carole King singing You’ve Got A Friend as a compromise to play in the background. We seem agreed on that. For now!

No matter how great an idea may be, like Robert and Heather we need to keep the big picture in our retirement marketing in focus – what are we trying to do here? Following on from last month where we spoke about the changing face of retirement and the importance of wellbeing, keep in mind that wellbeing isn’t just about providing facilities. It’s just as much about cultivating a community to use them – whether a gym, day spa, golf course or vineyard, they’re all rather pointless if they remain empty.

Our Marketing and Sales Strategist Helen Lear advocates strongly on the importance of employing the right village manager.

“Everyone knows community is one of the top reasons for retirees moving to a village,” says Helen, “yet many times I’ve seen villages lose opportunities because they lack a warm and buzzing community. So much of community wellbeing comes down to the vibrancy of the village manager and staff. They need to exude life, and have that natural ability to bring people together. Potential residents can’t help but sense the absence or abundance of community life when visiting a village.” So, having the right people in place is really important, and along with that there are many great initiatives that may be suitable for your village.

A while ago I came across the story of Maria – a lady in her mid 80s who moved to a retirement village in Helsinki, Finland. After a stroke left her dependent on community nurses to get through the day, Maria began a wellness program. Unbelievably, after only three months, she could live independently, and has since completely reversed the trajectory of her physical and mental decline. The remarkable results seen here were compelling

More recently, in conjunction with HUR Australia, we launched the Helsinki Program in Australia – a ground-breaking approach to seniors’ health. In one of our NSW marketing projects we brought together advanced health and fitness technology from Finland, along with accredited trainers, and integrated them into a wellbeing program to enhance community life.

From an operator’s viewpoint, advantages of this kind of program are threefold: it generates participation not only from residents but also from the general public; it could be self funding; and it would provide a USP to any new or established village.

For the residents, the advantages are evident – not only in general physical and mental wellbeing, but also in aiding in recovery from injury and preventing loss of muscle mass.

As we all know, there will be an increasing need for retirees to live more independently within their community – ideally an environment that fosters health and wellbeing! Dave Bernard, author of I Want To Retire! Essential Considerations for the Retiree to Be writes that “a recent AARP study found that due to shifting demographics, aging baby boomers will have fewer friends and family to take care of them as they move into their 80s. The ratio of potential caregivers to boomers is projected to decline from more than 7-to-1 in 2010 to less than 3-to-1 by 2050. Although many retirees believe they will be able to rely on family to meet their long-term care needs, families may become overwhelmed by the time and financial commitments of doing so.”

Recently, Professor Hal Kendig of the Australian National University and his team of researchers created a pilot study based on 136 people aged 59-95 . When surveyed about the pros and cons of living in a retirement village, an astounding 93% reported at least one advantage, and only 25% reported any drawbacks at all. So what is it people are looking for? Primarily it’s the social contact, the activities, and a feeling of community (for the full report see link below). To quote a line from The Castle, one of my favourite movies, “it’s the vibe”.

Globally there are myriad village activities happening as we speak. What program do you have or want to develop to inspire the ‘boomer generation’ (ie. Heather and Robert) to live in your village?

Sources:
1. The subjects of the research were residents of two IRT retirement villages. Click to read the full report
2. Dave Bernard's statement on the importance of community in retirement