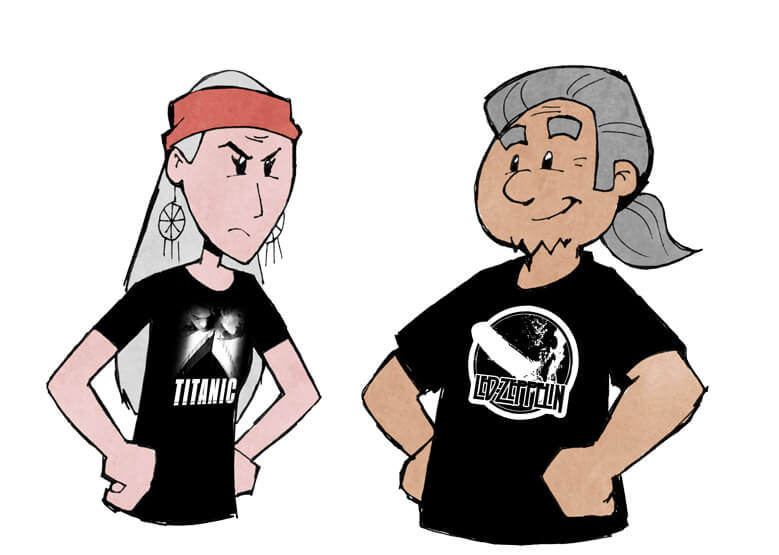 What will retirement for baby boomers look like? Hotdogs, Virgins and screenwriting

Heather’s story
If there’s one thing Robert hates more than a vegan dinner, it’s Celine Dion. In fact, she sits marginally below his hate for Volvos and John Denver – not necessarily in that order. So we’ve been at loggerheads this week over our bridal entrance song.

I’m insisting on Celine Dion’s ‘The Heart Does Go On’ from the film Titanic as a symbol of our enduring love. Robert said he always thought that song was ‘The Hotdogs Go On’. I said why would the celebrated Canadian vegan be singing about hotdogs? He said why would anyone choose a song to represent enduring love from a film about ship that sank on its maiden voyage? (He has a point.) But it’s annoying Robert’s putting his foot down. Who made him captain of this ship? The song he wants is – wait for it – Led Zeppelin singing ‘Whole Lotta Love’.

Are you kidding me?

Zeppelin?? I’m not having a bridal song that evokes the Hindenburg Disaster. (A moot point, I know.) So presently it’s Hindenburg verses Titanic. Robert’s stopped having ice with his bourbon in protest.

Who can blame Robert for wanting change? Wanting to distance himself from clichés. The world is changing. And retirement along with it. In our ageing population, baby boomers herald the biggest wave of retirement ever seen. And compared to the ‘builder generation’ before them, these retirees want something different, a change. And a big part of that change is ‘wellbeing’.

‘Wellbeing’ is defined by the Oxford Dictionary as ‘the state of being comfortable, healthy or happy’. There are, I acknowledge, much broader definitions but for the purpose of this blog we’ll keep it simple. We must also consider that the practice of maintaining/developing wellbeing differs between generations and culture. The builder generation sought wellbeing through security, as they felt most safe and at ease when they were secure. The boomers however also want fun. The big question is whether our current way of providing retirement will satisfy this fun side of wellbeing to current and future retirees. Or will it become irrelevant in a changing world?

Moreover, with wellbeing now a billion-dollar industry and an incredibly powerful marketing tool, can we afford to overlook it? There’s only one thing to do: change our attitudes towards retirement.

In the US this thinking is already occurring. Interestingly, there are now university-based retirement communities, which offer senior living facilities that are located on, and integrated into, university campuses. Andrew Carle, assistant professor at George Mason University who specialises in senior housing says, ‘communities, which attract aging intellectuals and self-improvers who want continuing education opportunities, have grown from almost none 15 years ago to around 50’. Carle adds, ‘Boomers have already sparked an explosion of products – why would it be any different with retirement? The critical mass is there and boomers want to do a lot of what they love when they retire.’

NoHo Senior Artists Community is a retirement village for writers, actors and artists. It’s a really different perspective on retirement living. Imagine working on your new screenplay instead of bingo!

Doubtless, the Godfather of ‘change marketing’ is Richard Branson. Through Virgin Air he elevated flight travel from something to be endured to an affordable in-club, a fun community with a bit of sass. I often ask what Virgin would do if they entered the retirement industry. No doubt mind-blowingly different in product, value proposition and culture shift. Something tailored to our boomers.

This leads me to ask myself what will a retirement village look like in the future in Australia? Will clients be lawn bowling or ten-pin bowling? Will they be playing bridge or X-Box? Will they be attending jazz concerts or rock concerts? Will we see villages look more like Greenwich Village: an amalgam of cafes, bookshops and groovy record stores? Will these retirees live in villas or studio/warehouse style apartments? Society is becoming more bohemian. More cosmopolitan. Will retirement follow suit?

So how will you cater for these retirees who are thirsty for change and heat-seeking missiles for fun? How will you replace the bingo? It may be something out of left field that’s never been done before. Think outside the crochet square. What if part of your village was a vineyard? Of course climate and geography has something to do with it, but after all some of these boomers have bohemian roots (look at Heather and Robert). Village residents could grow and be involved in the wine-making process. Monks have been doing it for years. Indeed, just outside San Francisco is a retirement village called Trilogy at the Vineyards. Here retirees live among the vineyards and get involved in the life cycle of wine. How long will it be until we see a village in the Hunter or McLaren Vale in a vineyard itself?

In future blogs I will explore wellbeing further. It’s a broad concept but we’ve whittled it down to what we think are the most important facets – wellbeing within a village, and the wellbeing of a campaign.

Is a different kind of wellbeing on your radar that would relate to the next wave of retirees?

You inspire me in my work
Reply