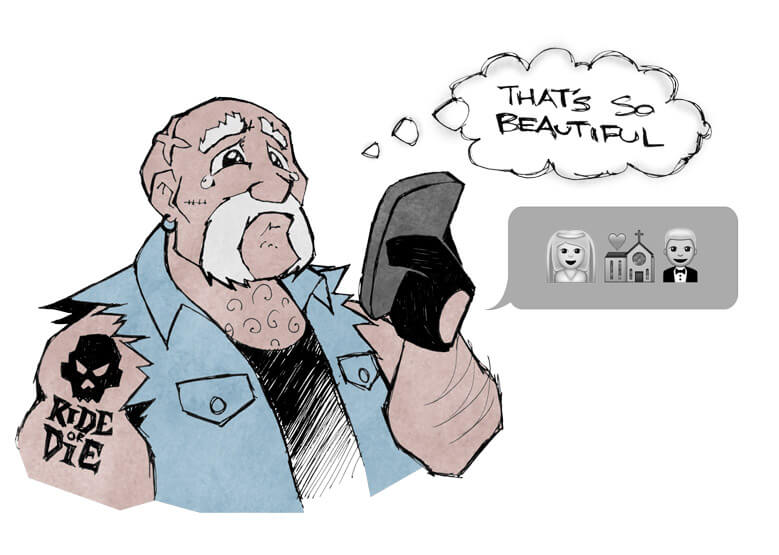 Heather’s Blog
Wedding invitations!
Robert says if he hears those words one more time he’ll bang his head against the wall while tossing a bouquet of spanners over his shoulder. He argues that in a world of high-speed Internet, fibre-optics, texting, Facebook, Instagram and Skype, the only people who send anything by snail-mail these days are banks and divorce lawyers.

Next we’ll be having people reading “telegrams” at the wedding, he added. (Can you even send a telegram anymore?) It seems none of his mates from the Harley Club even have postal addresses! Robert favours an ironic text message with a suitable emoji. If people turn up, they turn up, he says. (I vetoed the ‘wedding text’ in a nanosecond.) However, I am toying with the idea of building a website where guests can both RSVP and donate the money they would have spent on a gift to the Ethical Treatment of Lobsters; hey, they go into the pot black, come out red. You work it out!

Anyway, whether it’s Robert’s way or my way, it saves trees. The only fly in the ointment is mother. After hearing about the website and the ‘wedding texts’ – with much meditation and prayers to St Jude (Patron Saint of Lost Causes) – she went and printed 60 absolutely hideous wedding invitations with her Wednesday craft group. What’s the collective noun for a group of crafters? A murder? A tragedy? So yours truly is left fuming about the awkward position I’m now in. Robert’s no help. He loves her invites. Thinks they’re ironic.

The debate is everywhere, including retirement marketing. Is print still effective? Are there enough seniors online to warrant a relevant internet campaign? If so, where online do they congregate? And how often?

On one hand, internet users aged over 65 are among the fastest growing group of social media users in the world. In 2014, 21% of those aged 65 plus used social media at least once per day, an increase of 28% since 2013.

On the other hand, it is argued by global research agencies like Millward Brown that print materials leave a deeper footprint on the brain than virtual. Their findings, substantiated through published scientific journals, indicate increased brain activity in areas associated with higher cognitive functions such as memory, emotion and reflection. In other words printed advertising has a more personal effect than virtual, which increases connection and resulting motivation for target audiences to respond.

Anecdotal findings about print's superiority were reinforced earlier this month by an academic study. The paper, “Medium Matters: Newsreaders' Recall and Engagement With Online and Print Newspapers”* studied web readers of the New York Times against readers of the print edition. Each group was tasked to complete a short survey after 20 minutes reading time. The results were fascinating. Researchers discovered that the print readers (and I quote) “remember significantly more news stories than online news readers”; and moreover print readers “remembered significantly more topics than online newsreaders”; and print readers remembered “more main points of news stories”. To read more about these findings see this article on print vs online.

Having said that I believe that both online and print have their advantages, so, for instance, we might suggest a print media campaign that steers the reader to a client’s website. An integrated campaign across various media is key.

We have a client in country NSW whose target audience predominately works long hours on the land or in small business. With our market research showing a preference for printed materials, we developed a print and direct-mail campaign – the ‘Leave your cow, bring your dog’ campaign – which resonated particularly well.

On the other hand we also have a Bowral village project attracting high-income earners from the local area and Sydney’s north shore. Recognising the importance of music in attracting this niche market we produced a music video for an online YouTube campaign, written and produced at our in-house studio, tapping into that group of seniors who are online regularly. It was mastered at Abbey Road Studios, London (yes, the Beatles one!). Twenty-two villas were subsequently sold over the weekend launch of the village.

Whichever combination of print and online media you choose, it’s important to incorporate the Three Second Rule. We’ll talk further about other forms of media later in the year. So for now, which channel do you use more – online or print? Which have you found more effective? Any thoughts on how this might change in the future? Do share them with me.

Can a wellbeing program not only be good for the residents but also a revenue stream for the village?

What will retirement for baby boomers look like? Hotdogs, Virgins and screenwriting

Hi Jeff - nice video, but the actors seem a little young for the target age group (who, I'm assuming, are in their mid to late 70s?)
Reply

Thanks for the read, glad you enjoyed it! Jeff McGarn
Reply